The Isle of Wight Arts League

Priscilla Barbour​
​'Cil' Barbour is a recent transplant to Newport News, VA after several years in the Smithfield/Carrollton area. She is an artist, teacher and community activist, who enjoys painting colorful works in acrylic and oil in her studio Arts Center @319 on Main Street in Smithfield, VA.  Married to a retired U.S. Navy Captain, she has traveled and lived in various locales across the United States, while raising two now grown sons. She began her interest and career in art a little later in life. Her works hang in corporate, civic, and private collections in the U.S. and Paris, has received several community awards, and was selected for the prestigious Virginia Artists Juried Exhibit at the Hampton, VA Charles H. Taylor Center for the Arts in 2014.
Tammy Burgett
Tammy Burgett, a resident of Smithfield, VA (and previously Idaho, California and Michigan) is an artist who paints with Alcohol Ink in an expressive realism style. Though she has no formal art training, having instead spent her college years studying packaging engineering and the following decades working in the corporate world, she has expressed her artistic side through quilting, jewelry making, gardening, furniture painting and the pursuit of all DIY art projects prior to painting.

Tammy discovered alcohol ink in 2014 and fell in love with their vibrant colors and unexpected behavior. She says “the engineer side of me loves the challenge of trying to control the unruly inks while the creative side of me just wants to dive in and see what happens.” She is inspired by the beauty of coastal Virginia and its waterways and when painting she strives to remain open to whatever the inks want to.  “Every time I paint it’s a happy surprise – sometimes things turn out as I planned and sometimes they don’t – much like life. I’ve learned to just let go and enjoy the experience. The magical moment for me is when the blank canvas becomes something worthy of sharing with others.”
​
Tammy is a member of Isle of Wight Arts League, Hampton Art League, Suffolk Art League, and the Alcohol Ink Art Society and her artwork has been included in shows and exhibits at each location.  She has participated in the annual Nansemond-Suffolk Academy Art Show (2015-present) and her work has been juried into local art shows (Hampton Art League Small Works Show 2019, Smithfield Boardwalk HeArt Show 2018 and 2019), and the 2020 Smithfield Autumn Art Show. Tammy is a resident artist and instructor at The Arts Center @ 319. She also has a studio in her home and has been known to venture outside to paint plein air in Smithfield and other local spots.
Artist Facebook – https://www.facebook.com/TammyBurgettArt/
​ 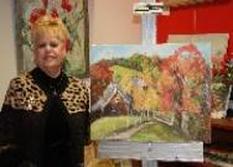 Bobbi Canellas moved to Hampton Roads from northern Virginia where she had lived for over twenty years. Bobbi attended Bloomsberg State Teachers College in Pennsylvania and George Washington University in Washington, DC, where she majored in Art and minored in Education.  Bobbi has studied painting in Vienna, Austria and Mallorca, Spain.

Bobbi is considered an impressionist painter and believes that the play of light and dark on canvas along with the use of vivid colors create emotions that are very important to her work. Although she has taken many mixed media courses, Bobbi's true love is the use of oils for the beautiful texture and colors that they are capable of producing. 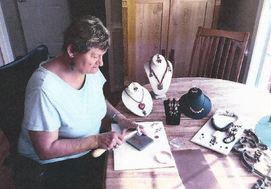 Diane Milner
​Originally from Colorado, I’m a graduate of the University of Northern Colorado and Boston University.  I taught school in Nebraska, served seven years as an Army Officer with the Corps of Engineers, and recently retired from civil service with the Army after 36 years.  My husband and I live in Carrollton, VA and have a son who lives in Fairbanks, Alaska and visit often.
My mother was a Home Economics teacher and instilled in me a love for handcrafts.  I’ve taught monthly arts and crafts program for a Newcomers group while living in Medford, NJ; worked as a picture framer for an art distributor in Heidelberg, Germany; and recently got hooked on designing jewelry.  My jewelry on displayed here at the Isle of Wight Arts Center in Smithfield, VA, with the Poquoson Art League, and at local craft festivals.  I have taught jewelry design classes in Newport New, Williamsburg, and Smithfield and have consigned at the Virginia Natural Bridge State Park and the Rockbridge Center Cavern’s gift shops.
​
Sheila Gwaltney graduated from Smithfield High School and Mary Washington College returning to live and work in Smithfield, where she and her husband raised their son and twin daughters. In college, she took as many studio art classes that she could fit into her schedule. In 1985 she enrolled in a plein air painting workshop offered by John Loren Head, a seasonal resident of Smithfield.  Sheila says, “Mr. Head was an excellent artist and a truly gifted teacher who took my painting abilities and understanding of art to the next level.  He gave me the tools, the focus and the desire to make art.  Art became a way of thinking, a way using the gifts and experiences of my life. “

Sheila is a member of the Isle of Wight Arts League and the Woman’s Club of Smithfield where she serves on the committee producing the Smithfield Calendar featuring pen & ink drawings of historic buildings and sites drawn by local artists.  She enjoys painting landscapes, portraits, animals and the opportunity to teach drawing and watercolor at the Arts Center.

Sheila is the Director of the Arts Center @ 319 and a member of the Smithfield 2020 project team.

Diane Zaugra Greenhalgh is a realist painter who enjoys working in oils, acrylic and watercolor. After graduating from college in 1983 with a B.A. in Art/Illustration, she began her career painting small landscapes in acrylic on paper, showing and selling her work in galleries in New Jersey, Philadelphia and New York City. She found inspiration for her landscapes from her seashore surroundings growing up on Brigantine Island, New Jersey.

Diane went on to work as a graphic designer for many years, married and moved to England in 2001, had a daughter in 2003, and relocated to Smithfield, Virginia with her husband and daughter in 2004.

After taking time off to raise her daughter, Diane has rekindled her passion for art. She is excited to be painting again and enjoys working with a variety of subject matter, such as landscapes, portraits and still life.  She is a member of The Isle of Wight Arts League, a resident artist at The Art Center @319, and has recently won third place in The Genuine Smithfield banner contest with her artwork, “Oink, Oink and Away!” When not painting, Diane keeps busy volunteering with her church’s flower guild, her daughter’s Girl Scout troop and the PTA.